Thank you to all who joined us in person or in spirit for our recent pilgrimage to the Shrine of Our Lady of Good Help. Please refer to our News page to see a few photos of the adventure. 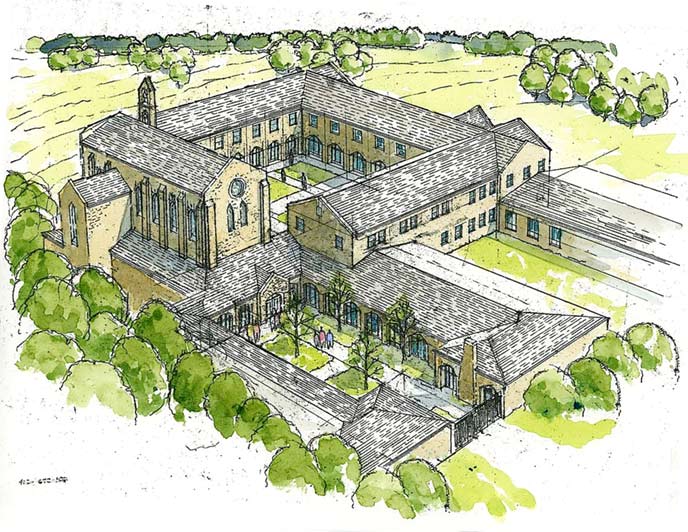 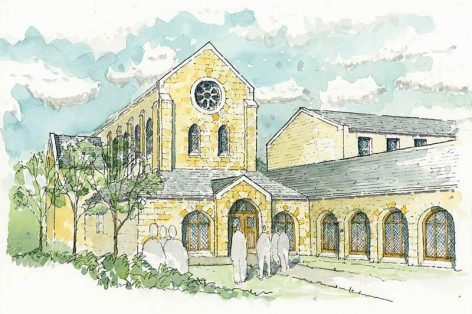 The completed monastery complex will include a chapel for nuns and guests; quarters and parking for guests; living, working and other liturgical and ceremonial spaces for the nuns; an altar bread production building, garage and various outbuildings. 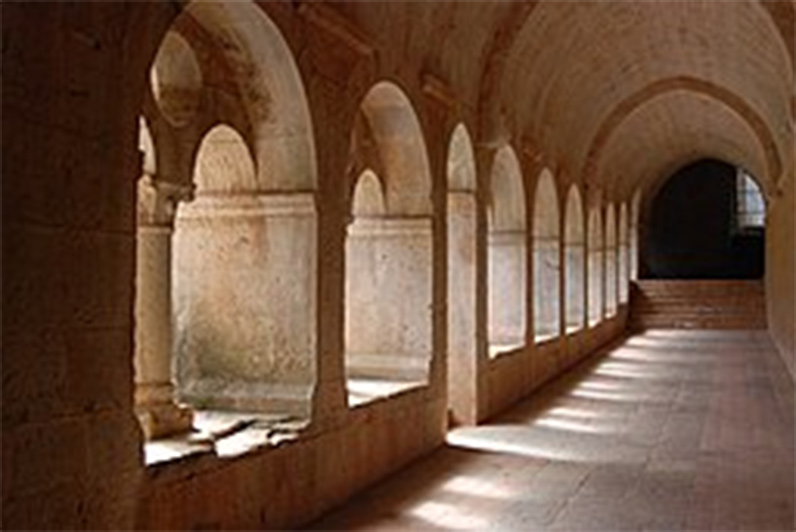 Early Cistercian architecture will provide the primary basis for design, especially in liturgical spaces. The design will be articulated as large-scale residential and light industrial (altar bread), not commercial. The design will also incorporate vernacular elements, but in a way that renders them timeless, pointing us all towards eternity. 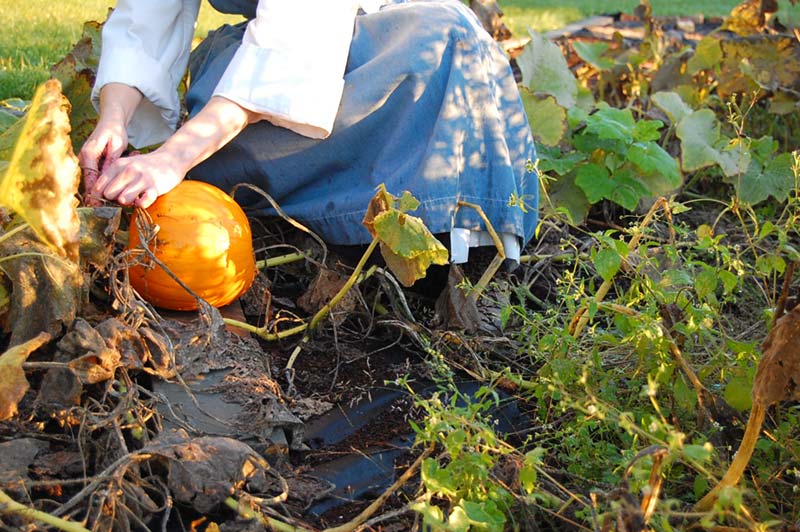 We hope to use passive, natural, simple, low-tech systems as much as possible, as well as capitalize on natural heat, natural cooling, and natural ventilation. Our resources available for this purpose are limited, but we invite donors to consider helping us reach this goal. 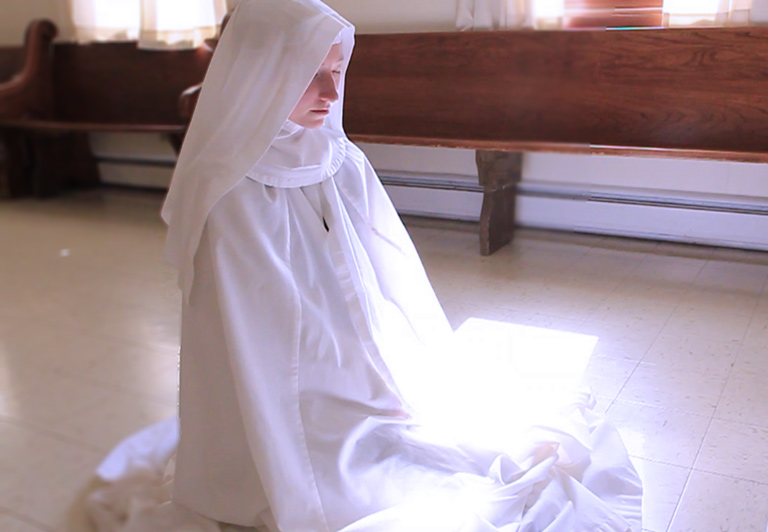 We are aiming for excellent indoor air quality and access to natural light; maximum use of low- or no-toxin-outputting products as much as possible; and ease of access to Creation, at least visually, for all sisters and guests. 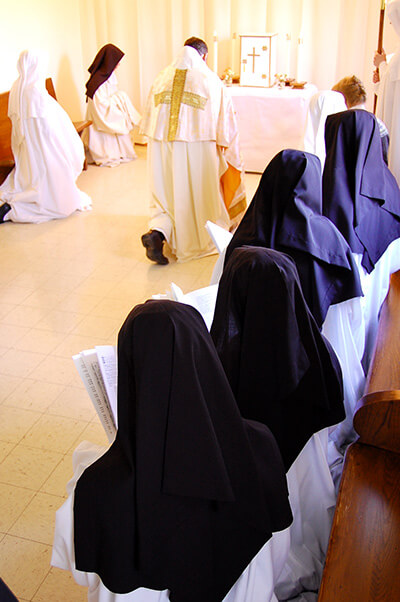 As a matter of principle, we seek the highest quality and integrity in every aspect of the project, in processes, documentation, human creativity and interaction, materials, craftsmanship and ethics.

By wisdom the house shall be built, and by prudence it shall be strengthened.
By instruction the storerooms shall be filled with all precious and most beautiful wealth.

IN 1957, six Cistercian sisters came to Wisconsin from the Cistercian abbey of Frauenthal in Switzerland with their Abbot General’s blessing and at the request of Bishop William O’Connor of the Diocese of Madison. 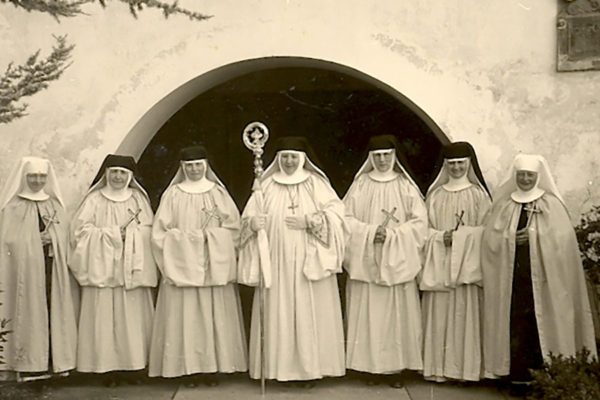 THEY SETTLED in a mixture of buildings that already had quite a colorful history: Beginning as a stone cabin built in 1859 by one of the earliest pioneer settlers in the area, it had received an upgrade in 1921 when the governor of Wisconsin built a two-story, white, pillared addition, making it into his summer residence. 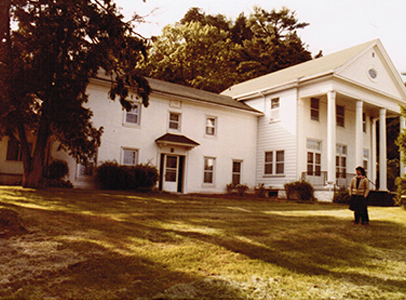 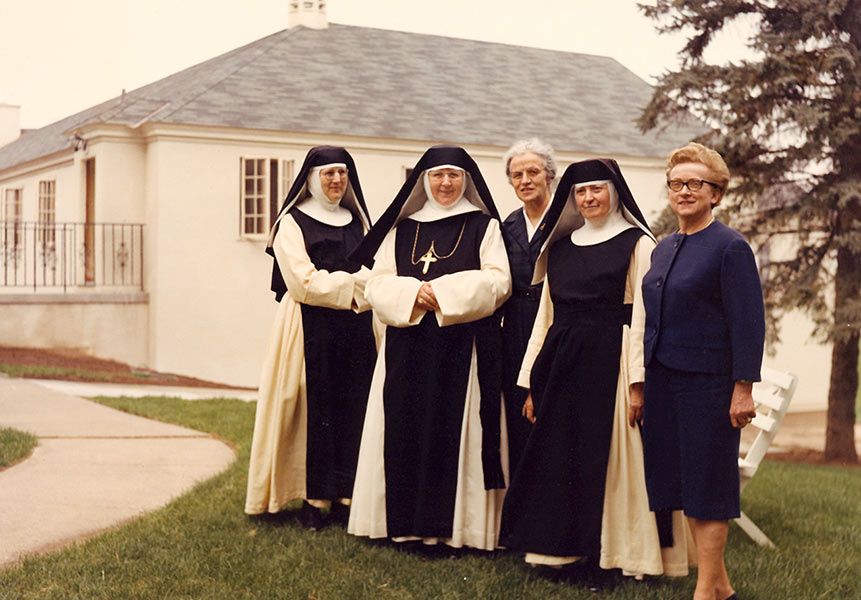 Foundresses with friends of the community at the dedication of the chapel addition built in 1965.

AS the years went on, however, what happened in fact was that the sisters continued to maintain, expand, and creatively reconfigure the current buildings. Since our founding, we have made two major additions to the current structures as well as numerous renovations. More than sixty years later, the buildings never meant to be permanent are still our home.

IN EARLY 2000, with the 50th anniversary of our foundation approaching, we initiated a re-location effort. Shortly thereafter we conducted a modest capital campaign, which raised sufficient funds for new property and part of the necessary design work. During the campaign, a couple from Highland donated property; we accepted but later returned it due to incompatibility with project requirements.

In 2011, after evaluating hundreds of parcels of land, we settled on a 229-acre farm in Iowa County for the new location. From 2002-2015, we worked on and off, as our community life permitted, with multiple design professionals and a variety of other consultants.

The way is long, the way is far, but God is with us, so we are not afraid.

Why build a new monastery?

To the casual visitor to our current monastery, appearances may seem to indicate a set of buildings in decent condition, in a peaceful rural setting. Such a visitor may find himself wondering why a new monastery needs to be built at all. Couldn’t the current buildings be repaired? Couldn’t they be added onto?

There are four main reasons that an entirely new monastery complex is necessary.

“Isn’t there enough room in all this square footage to house a mere 20 women?”

A monastery contains a whole lifestyle: It is home, church, and workplace all in one. The sisters live in this environment 24 hours a day, 365 days a year, for their entire life.

In terms of square footage per occupant, it may seem like there is plenty of space for 20 women. However, the common areas—that is, the rooms in which we all gather for community activities, such as the choir loft and refectory—are filled to capacity, with no way to enlarge this capacity. We are also running out of bedrooms for newcomers.

Choir loft is at capacity, with no room to expand.

“It seems that the problem of not enough space could be solved simply by adding on to the existing buildings.”

The space shortage is not the only issue with the current monastery. Besides being too small, the buildings and rooms themselves are not conducive to daily monastic life and its rhythms and schedule.

Monasteries have traditionally been built on a quadrangle layout: a central courtyard, with all the monastic buildings built around it. On a functional level, this makes for more efficient traffic flow within the monastery; but the layout of the rooms is not simply a matter of utility. One’s surroundings have a deep psychological effect on a person living in them, especially when one is living in the same buildings all day, every day, permanently. It is important that the architecture and layout of rooms reflect the deeper spiritual ideals of the community that dwells in the building.

Compare a bird’s-eye view of our current configuration with a basic floor plan of a traditional monastic quadrangle.

One can see that we already have a basic eastern half of a cloister; couldn’t we simply add on the western half?

What is not apparent from the bird’s-eye view is that the topography is prohibitive of any extensive building either to the east or to the west, without considerable reconfiguration of the land. To the west, a retaining wall [visible in the photograph] blocks the way, on the other side of which is a steep sandstone bluff. To the east, the land immediately slopes downward to become a pond. 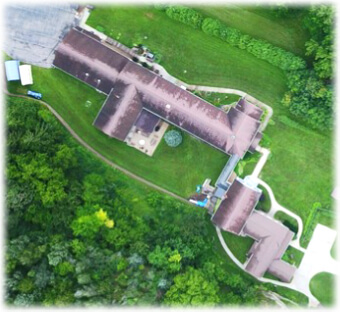 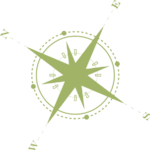 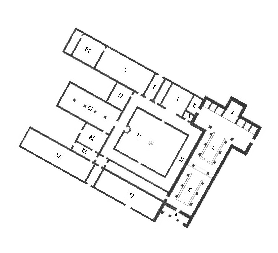 “Couldn’t the current buildings be repaired?”

In addition to these considerations, there is also the issue of the condition of the existing buildings. Over the years, the physical state of the buildings has worsened and is becoming increasingly unhealthy and dangerous. In the past several years alone, a number of electrical, mechanical, and other elements have required repeated repairs and major expenditures.

Several years ago, a professional contractor evaluated the buildings and determined that given the literally crumbling nature of the current buildings and the growing list of failing infrastructure systems, further repair and reconstruction would require millions of dollars – an expense that is not an advisable or sound financial decision. 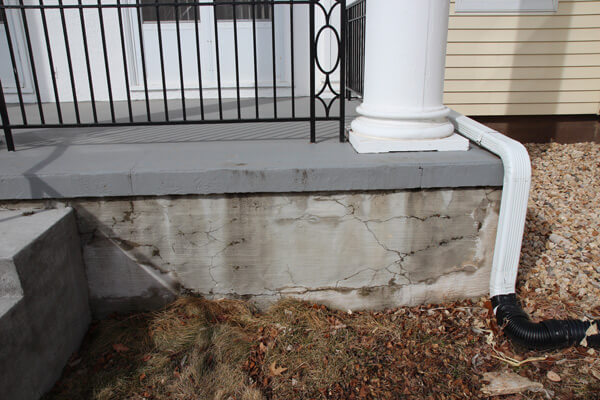 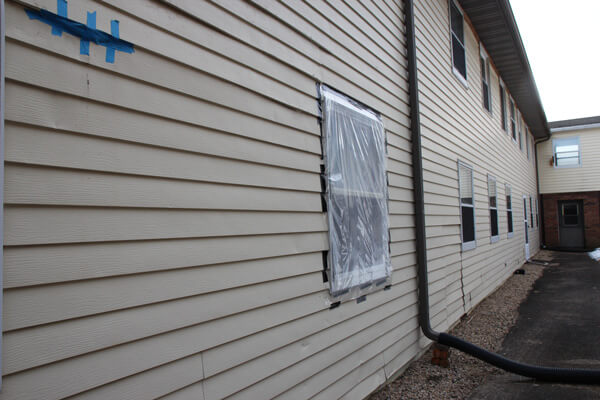 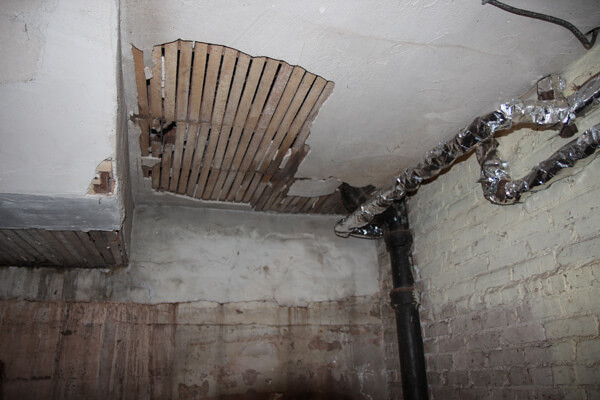 To a visitor coming from a busy metropolis, our current property may seem bucolic and far removed from civilization; and it certainly is by no means an urban monastery. Highway 12, however, is expanding and becoming more and more traveled; the trend of the last 20 years also indicates that local development and construction is creeping closer and closer to our monastery property – indeed, recently the government required a few of our acres for highway expansion. Furthermore, our current property has no space viable for construction of a sufficiently large building complex.

Enlarge the space for your tent, spread out your tent cloths unsparingly; lengthen your ropes and make firm your pegs. For you shall spread abroad to the right and left; your descendants shall dispossess the nations and shall people the deserted cities. 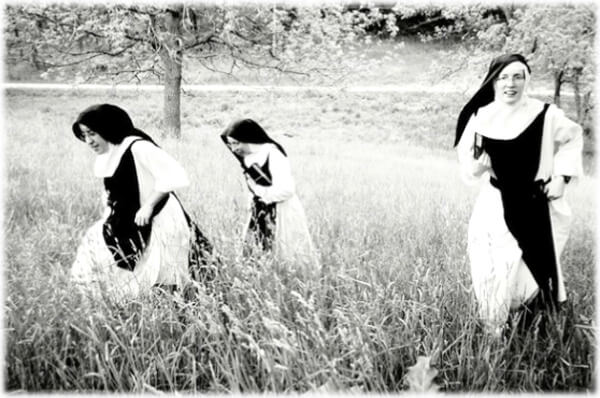 THE PROPERTY for the new monastery is located on Urness Road in Hollandale. These 229 acres in rural Iowa County are part of the Driftless Area. The mysterious and ancient ruggedness of the land strikes a note consonant with our ideal of monastic life.

Prepare your work outside, and diligently till your ground: that afterward you may build your house.

ORIGINALLY we planned to build on a raised mound in the central valley [1] because we were led to believe it was the only location capable of being rezoned to our purpose. There were several disadvantages to this location, but since it seemed to be the only possibility, we did successfully rezone a 20-acre plot.

IN LATE 2015 we learned that a significant portion of the western ridge [2] is not classified as prime soil and may be built upon. We are delighted with this prospect for numerous reasons, including much better opportunity for a passive solar design and other sustainable features, as well as increased centrality to our property. This centrality enables a much greater distance from any adjacent land owners, more enclosed space for the sisters, and a less complicated, less expensive driveway.

AS OF SUMMER 2021 our rezoning application has passed the first two initial approval steps. A few additional steps will bring the process to completion, we hope by early fall. Please continue to pray with and for us. 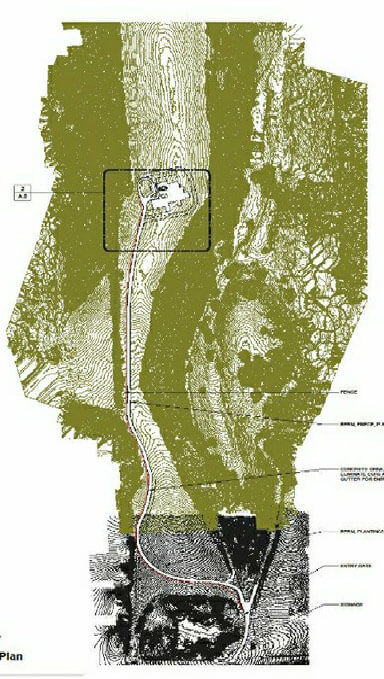 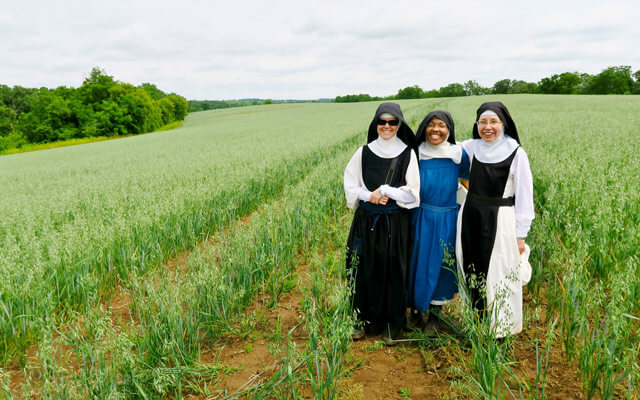 Who shall find a valiant woman?
far and from the uttermost coasts is the price of her

She hath considered a field, and bought it: with the fruit of her hands she hath planted a vineyard.
She hath girded her loins with strength, and hath strengthened her arm.
She hath tasted and seen that her traffic is good: her lamp shall not be put out in the night.
She hath put out her hand to strong things, and her fingers have taken hold of the spindle.
She hath opened her hand to the needy, and stretched out her hands to the poor.

We have initiated a capital campaign to raise the $18 million necessary for this monastery. To expedite our move, we initially divided the project into two phases:

PHASE 1, [in brown] estimated at $10-12 million, will include living quarters, our altar bread workshop, and a temporary chapel and guest quarters.

PHASE 2, [in gray] approximately $6-8 million, will complete the quadrangle of the monastery with a beautiful church and guesthouse.

Given our recent fundraising progress, however, we now hope to build in one phase. Although this goal will be a challenge, it will ultimately save a significant amount of money, so it seems the most prudent course to take. Please refer to our Matching Gift page for additional details.

Heavenly Father, we entreat Your blessing upon our efforts to build a new monastery where the Cistercian sisters of Valley of Our Lady can continue to dwell in Your presence, to sing Your praises and intercede for Your people. May our work with You and for You on this project and in all things bear eternal and abundant fruit. We ask this through the intercession of the Blessed Virgin Mary and St. Joseph, in union with Your Son, our Lord Jesus Christ.
Amen.

How lovely Your dwelling, O Lord of hosts! 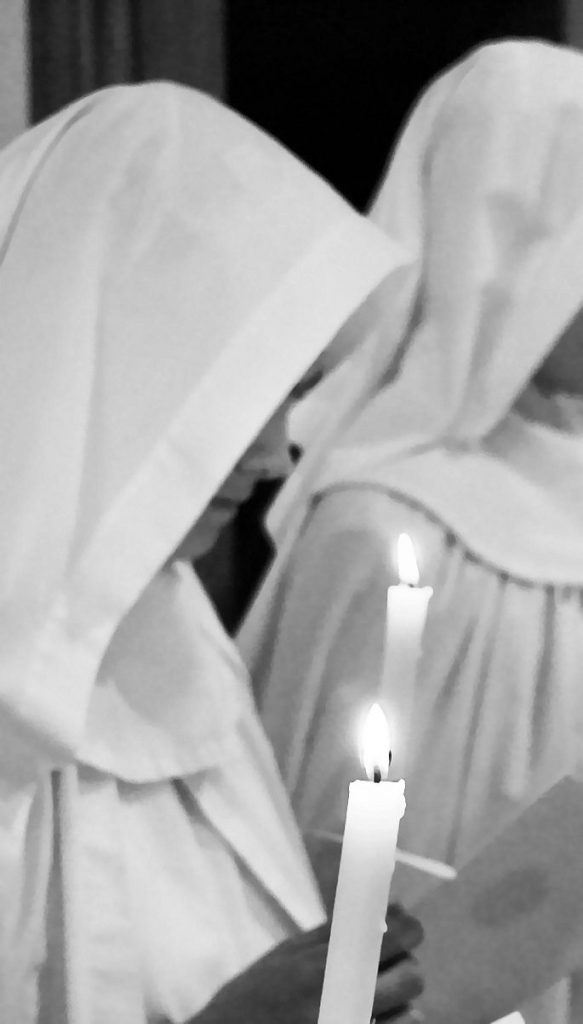 Happy are those who dwell in Your house! They never cease to praise You.

We also gratefully acknowledge all those who are joining us in prayer, who are donating generously, and who are giving unstintingly of their time, effort, and skills. This house of God is being built by the cooperation of a multitude of His people; we appreciate our communion in Christ with all of you.

The Church is the heart and soul of the monastery, the locus of the daily Mass, the singing of the Divine Office throughout the day, and private prayer before the Blessed Sacrament. 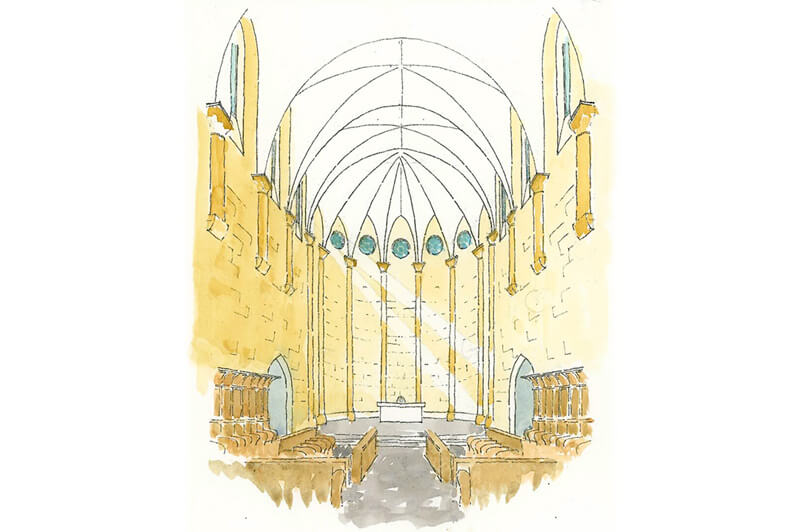 The Church interior will be designed in accord with Cistercian aesthetic principles of simplicity and light. 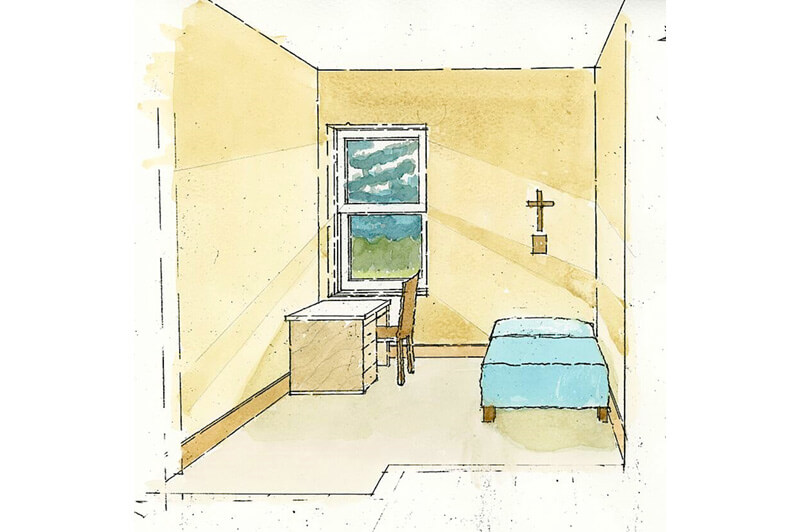 The cell is not merely a functional space, that is, the place where the nun sleeps, but it also serves as a place of prayer, reading, and study, a place of solitude and communion with God. 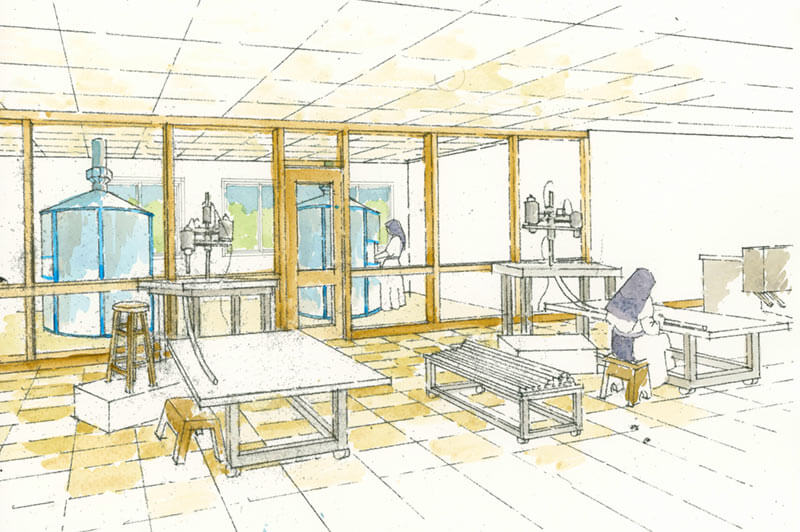 We are privileged to have as our main source of income the baking and selling of altar breads. What we make with our hands will one day be transubstantiated into the Body, Blood, Soul, and Divinity of our Lord Jesus Christ. 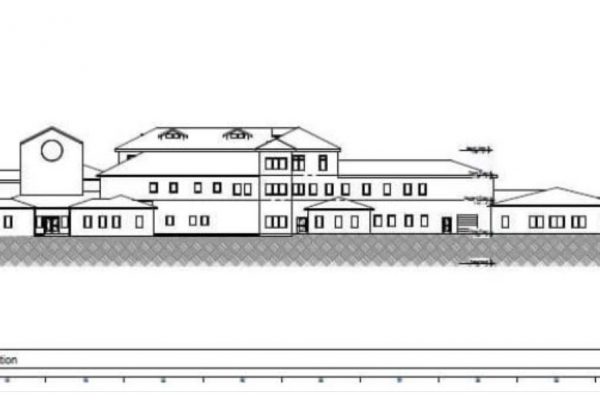 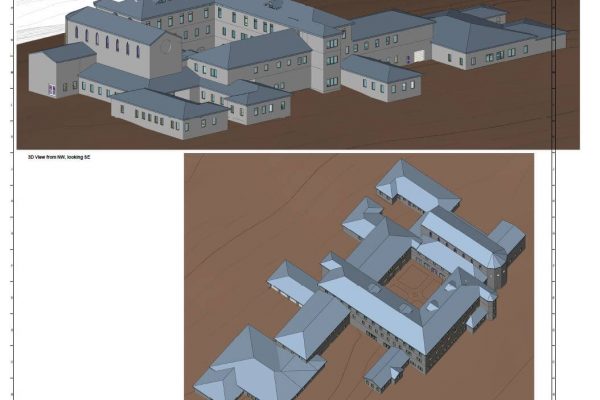